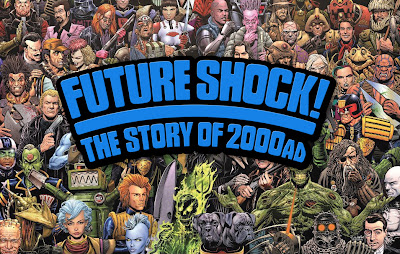 We have officially announced that FUTURE SHOCK! The Story of 2000AD is currently in production. Our friends at IGN.com ran the exclusive news last week.

Just as a little background, my name is Paul Goodwin, I'm the Director. I am a partner at Stanton Media who are producing the documentary together with Sean Hogan (Director of The Devil's Business) and Helen Mullane (Freelance Development Executive previously at Studio Canal). My partners at Stanton are Jim Hinson and Nick Harwood, and we'll all be blogging during the production.

We've been planning this documentary for a long time, and I believe it's a long overdue story to be told. As we said in the press release, 2000AD is the comic that people don't know they like.  It's impact and influence has been rippling out into British pop culture and beyond for the last 30 years.

Personally speaking, the stories, the characters and the attitude that I discovered in 2000AD back in the 80's have never left me, and everyone I have met over the years who got into comics through 2000AD has a special, cherished place for it.  It's this enthusiasm and passion that we all share, that's why I wanted to make this film.  It's going to be for everybody, for us as fans to celebrate this special comic we love, and to share with everyone else - because they're already fans, they just don't know it yet!

So this is our production blog, where we will post regular updates during filming, keeping everyone up to date with the latest news, as well as details of the interviews we'll be conducting for the film. We have already spoken to some key contributors and it's all really bloody exciting! I'll post again soon with details of the production so far and then we'll take it from there..

So sign up for email updates and check back here regularly for all the news.