On the Weston front...

During our visit to London Super Comic Con back in February - we managed to grab some time with Chris Weston.  It was a great interview - Learning how Chris got his break as an artist on 2000ad (and how much it meant to him) was really cool. 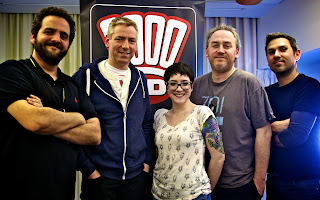 Chris was very honest and forthcoming, discussing the various periods of change and upheaval at 2000ad - particularly interesting was hearing how new artists would occasionally explode onto the scene and just blow everyone away with their artwork...and then as a result other artists would be "guided" to adjust their own style to match...with varying degrees of success...He also had an interesting perspective on the mass exodus of British artists and writers to the U.S. - but I don't want to say too much here - you'll just have to check out the film when its finished...!

If you're not familiar with Chris's work - which I think is highly unlikely if you're reading this blog - then check out his site http://chrisweston.co.uk/ - there's some lovely stuff on there including some great storyboard work he did for the film "Book of Eli".  Go and check it out.