A few weeks ago we were up in Edinburgh for our long awaited screening at the Edinburgh International Film Festival.  We were told back in January that we had been selected so we've all been very excited about this for a loong time!  The festival itself has a really laid back vibe, and all the event organisers were super friendly and helpful, which makes the whole experience so enjoyable (apart from tanking so badly in the bloody movie quiz!).

A few people noted that it was like a 2000AD homecoming, considering the wealth of Scottish creators that have contributed to the comic over the years, including John Wagner, Alan Grant, Cam Kennedy, Grant Morrison, Mark Millar and Colin MacNeil to name just a few...  Indeed Judge Dredd himself was first conjured from the minds of Wagner and Pat Mills in what is now known to fans as the 'Thrill Shed', an actual garden shed the pair used as a writing room at Mills' previous home in Dundee! 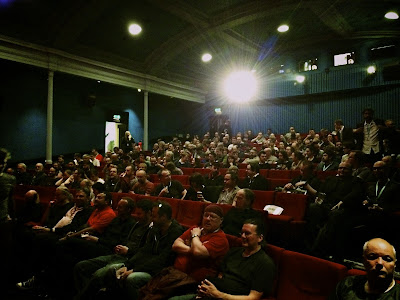 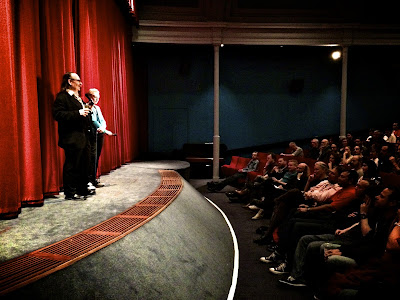 Before the show the Filmhouse was bursting at the seams!  It was a fantastic sight and a very proud moment to see that so many people share our passion for the comic.  Our good friend Kim Newman got up onstage to introduce the film. He had walked through walls to be there as he'd fallen quite ill the day before and could barely speak, but he soldiered on and was hilarious - I loved his comparison of Dredd and Desperate Dan, who share the fact that they are both very a British view of our American cousins but in such different ways!

So then our little film played and seemed to go down a storm! 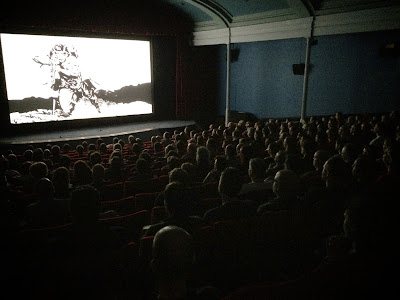 After the screening we were super thrilled to have Pat Mills and Emma Beeby joining Kim, Sean and I onstage for a Q&A panel, and in the audience was none other than Colin MacNeil himself. It was good catching up with them all for a wee dram in the bar afterwards too. The thrill power didn't end there as we were just the warm up act to a screening of Dredd in all its 3D slo-mo glory!

It was a great experience, and it's a genuine honour to be able to share this film that has taken so much effort and passion to produce. To see it up there on the big screen with an audience that shares our love of 2000AD is just very, very cool.

Enormous thanks to Edinburgh for having us and to everyone who came, it was a very special night!